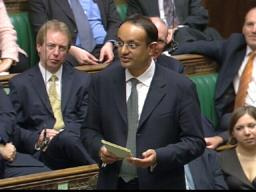 Former Leicester South MP Parmjit Singh Gill
A delegation has visited Downing Street to seek support for a campaign against the execution of a prisoner in India.
Former Leicester South MP Parmjit Singh Gill and Sital Singh Gill, general secretary of the Indian Workers Association in Leicestershire, spoke to David Cameron about the case of Balwant Singh Rajoana.
He is on death row in Punjab for his role in the 1995 murder of then state chief minister Beant Singh, who was killed by suicide bomber Dilawar Singh.
Rajoana was convicted of acting as back-up suicide bomber, should Singh have failed.
He has not appealed against the sentence, though other conspirators have had the death penalty commuted.
Mr Singh Gill said: “It was a very worthwhile and constructive trip to London.
“David Cameron listened to us and seemed very supportive.
“He made it absolutely clear that the UK was opposed to the death penalty.”
The Leicester pair also discussed their fight with Liberal Democrat deputy leader Simon Hughes.
The Indian Workers Association is to follow up the meeting by writing to the Prime Minister, urging him to put pressure on the Indian government to abolish the death penalty.
Source: http://supportbalwantsingh.blogspot.co.uk/2012/04/delegation-meet-british-pm-over-death.html