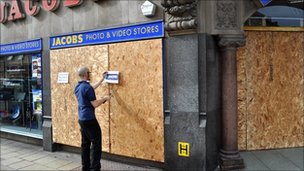 Stores were damaged during disorder in Leicester

A special meeting has been held in Leicester to discuss the recent riots.

The Indian Workers Association of Leicester invited politicians, police, school and religious leaders from the community to the event.

They discussed why the troubles broke out in the city and how a repeat could be avoided.

The meeting took place at the Guru Dashmesh Gurdwara in Gipsy Lane at 1800 BST on Saturday.

Sital Singh Gill of the workers association said: “We strongly believe that we need to unite all of the community to work together with the police, city council, and other agencies.”